Malaysia, one of the Tiger Club Economies, is dissociating from fossil energies and has put its Ulu Jelai Power Station into operation. The hydroelectric power station successfully contributes to peak load coverage and power supply stabilisation. With its high-performance compressors, Sauer Compressors is part of this sustainable showcase project. The machines generate the compressed air forcing water out of the turbines.

The Ulu Jelai Power Station opened in 2016 and is operated by Tenaga NasionalBerhad, the only energy supplier in Malaysia and one of the largest in all of Asia. The hydroelectric power station is located about 94 miles north of the Malaysian capital Kuala Lumpur in the district of Cameron Highlands and has a maximum generating capacity of 372MW. A 460 metre long and 88 metre high dam impounds the water which is brought in by three different rivers. In case of increased energy demand, the water is released from the reservoir and directed to turbines that drive the generators to produce electrical energy.

The Ulu Jelai Power Station contains two vertically installed Francis turbines. Their particular task is to drive the generators as synchronously as possible. Otherwise, the unwanted reactive power increases up to a point where the plant’s output drops down to zero. To avoid this, the turbines are put into a shift modification mode during periods of low energy consumption.

The shift modification mode requires the turbines to spin freely, therefore the water level has to sink down to a level of about one meter below the turbines. For this purpose, the water in the turbines is forced out by means of compressed air, which takes less than one minute. The power plant needs its own independent compressed air supply from compressors for this process. These compressors are usually sized to refill the air storage vessels within one hour after lowering the water level. “In the past, compressors with a pressure of up to 80bargwere commonly used, but today it is trending toward compressors with an even higher final pressure”, explains Lars Effinger, Sauer Compressors.The SAUER Breeze WP221LM Basic generates compressed air to free the turbines and works as a backup in case of a misfunction. (©Sauer Compressors)

Sauer Compressors offers compressors particularly designed for this field of application, as several hydropower stations all over the world prove. Their flow rate and pressure range are tailor-made for the specific requirements of the plant operators. Sauer Compressors in Singapore supplied the Ulu Jelai Power Station with two WP3100 piston compressors from the SAUER Typhoon series. With a power of up to 55kW, the robust machines can generate a flow rate of 245m³/h at a final pressure of up to 100barg 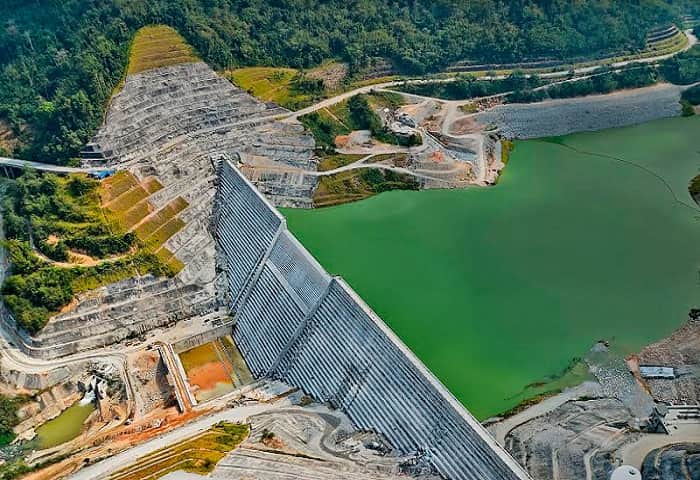 In 2019, Sauer Compressors supplied the Ulu Jelai Power Station with another compressor. With the SAUER Breeze WP221LM Basic, the first of the new medium pressure models is now used in a hydropower station for industrial applications. The air-cooled compressor can produce a flow rate of 420m³/h at a final pressure of up to 40 barg. In case of a misfunction, it works as a backup to ensure a reliable dewatering of the turbines. The Breeze series is based on a newly developed compressor platform and offers both easy operation and maximum reliability.

“With this order, we have once again proven our special competence and know-how as a supplier of equipment for hydroelectric power stations”, says Lars Effinger, Sauer Compressors. “The contribution to climate protection is great. The Ulu Jelai Power Station generates 326GWh of electricity every year, which avoids around 250,000 tons of CO2 emissions compared to fossil power plants.”

Sauer Compressors is a medium-sized German group of companies with 14 international subsidiaries. The company looks back on more than 135 years of history and over 85 years of experience in compressed air and gas technology. These days, the focus is on the development, manufacture and sale of oil-lubricated and oil-free medium- and high-pressure compressors for applications in commercial shipping, industry, petro industry and the defence sector. The four product lines SAUER, HAUG, GIRODIN and EK focus on specific fields of application. The SAUER line comprises oil-lubricated high-pressure compressors for a wide variety of applications, while HAUG stands for oil-free and hermetically gas-tight compressors. The GIRODIN and EK lines offer special compressors for the naval market. The modern reciprocating compressors for compressing air as well as a variety of gases reach pressures of 20 to 500 bar.g). In addition to standard products, customised solutions are offered for every type of application for individual customers, OEMs and globally active companies. With a worldwide network of representatives and partners, Sauer is always close to its customers. By supplementing the compressor range with high-quality accessories, engineering services, assembly and service concepts, Sauer provides complete system solutions right up to complete turnkey installations.

Blueleaf Energy and SunAsia to develop solar projects in Philippines