Iberdrola, named as one of the world’s 100 most sustainable companies

Iberdrola has been named as one of the world’s 100 most sustainable companies according to the Global 100 Most Sustainable Corporations in the World index published annually by Corporate Knights. The results of this 15th edition were announced this morning in Davos, as part of the World Economic Forum meeting which is held annually in this Swiss locality.

The main conclusion of this ranking is that “committing to a sustainable model produces the same or better returns for investors and improved longevity for companies” according to Corporate Knights. Proof of this is that in profitability terms the Global 100 Index performed better throughout 2018 than other indices such as the Ibex 35 or the Eurostoxx 50.

On this subject, Iberdrola’s director of Innovation, Sustainability and Quality, Agustín Delgado, has recalled how the model followed by the company is proof of the good results derived from commitment to long-term sustainable growth: “Following our commitment in 2001 to clean energy, smart grids and storage, we have gone from occupying the 20th place in the world ranking of electricity companies by market capitalisation to today becoming the 4th, and the 1st totally private one in Europe. Likewise, we have multiplied our asset base sixfold and tripled our net profit, which has allowed us to progressively increase our dividends, in line with results.”

The Global 100 Most Sustainable Corporations in the World ranking starts with an analysis of 7,500 companies with revenue in excess of one billion dollars, and is finally whittled down to 100 companies from 21 countries – mainly North American and Western European – in 30 areas of activity. 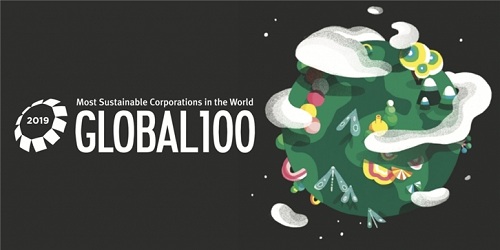 To produce the list, the organisation assesses aspects such as the relationship between revenue and tonnes of CO2 emitted and the percentage of women on the Board – 36% in Iberdrola’s case.

Also important is the ‘clean revenue’ aspect, introduced into the methodology last year which makes up 50% of the company score. This concept measures the percentage of revenue from products and services that have clearly-defined environmental or social benefits.

The inclusion in the Global 100 Most Sustainable Corporations in the World once more demonstrates the commitment of Iberdrola to the Sustainable Development Goals (SDGs) of the UN Agenda 2030.

The company focusses its efforts on the supply of affordable and clean energy (Goal 7) and on climate action (Goal 13) whilst also contributing directly to ensuring clean water and sanitation (Goal 6), increasing its investment in R&D&I activities (Goal 9), promoting respect for the life of terrestrial ecosystems (Goal 15) and working to establish partnerships to achieve the goals (Goal 17).

About Iberdrola
Iberdrola is a global energy leader, the number one producer of wind power, and one of the world’s biggest electricity utilities by market capitalisation. The group is present in numerous countries and supplies energy to over 100 million people mainly in Spain, the United Kingdom (Scottish Power), the USA (AVANGRID), Brazil (Neoenergia) and Mexico. With a workforce of 34,000 and assets in excess of €110 billion, it posted revenues of over €31.263 billion and a net profit of €2.804 billion in 2017.

Iberdrola is leading the transition towards a sustainable energy model through investments in renewable energy, smart grids, large-scale energy storage and digital transformation, offering the most advanced products and services to its customers. Thanks to its commitment to clean energy, Iberdrola is one of the companies with the lowest emissions and an international benchmark for its contribution to the fight against climate change and for sustainability.